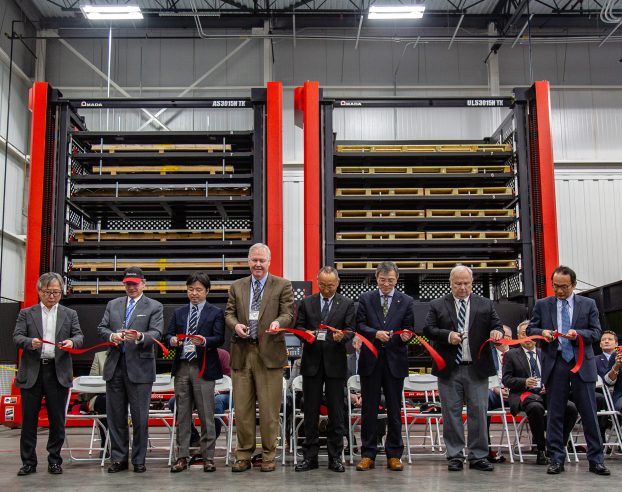 Photo and article by Ben Kleppinger

There are 65 new jobs in Danville today. Denyo Manufacturing held a ribbon-cutting ceremony Tuesday morning to celebrate the opening of its new expansion, a 63,000-square-foot facility dedicated to sheet metal fabrication, for use in the generators and air compressors made at the factory.

The ceremony wasn’t just ceremonial — it was held within hours of the facility coming online.

“I literally just received the occupancy certificate yesterday,” said Joey Harris, the plant manager at Denyo who has been with the company since it opened in Danville 25 years ago. “Look how quickly we filled it up,” Harris joked, gesturing to the more than 200 people in attendance on the factory floor.

Much of the equipment being used in the expansion is made by Amada, including a brand new “ACIES” machine that Harris said is “one of the latest in technology — life has just been given to it as we speak. It’s a brand new machine.”

This is Denyo’s fifth expansion since it opened in Danville, said Kenji Yamamichi, chief operating officer for Denyo’s U.S. division.

Denyo has grown from around 65 employees when Yamamichi first came here in 2010 to 265 today, he said. The newest expansion gives Denyo the ability to fabricate its own sheet metal — a necessary addition as the number of sheet metal suppliers available has dwindled in recent years.

Denyo first took over operations for one sheet metal manufacturer in Nicholasville after it announced it would go out of business. That 27-person operation has grown and now moved to Danville as part of the expansion. Denyo now has 76 people employed in sheet metal production, Yamamichi said.

Every worker from the Nicholasville facility stayed and moved to Danville with the Denyo expansion, something Yamamichi said he is very proud of them for doing.

“I think that is an incredible achievement that you have made,” he said.

Shiochi Shiratori, president of Denyo Co. Ltd., the company’s top executive, made the trip to Kentucky for the ceremony. He said Denyo’s growth in the U.S. is remarkable.

“Continue to make better products and aim for further growth,” he told the workers in attendance. “… I wish everyone and all your families happiness.”

Harris said Denyo’s continued expansion has been made possible by record sales years for Multiquip, the company that sells Denyo-manufactured products.

Bob Graydon, president and CEO of Multiquip, said Denyo’s and Multiquip’s growth is due in part to “favorable conditions” in the construction market, “but it’s more than that.”

“We attract and keep new customers because you guys make the best portable generators in the world — that’s true,” he said. “… Customers always want things. They want bigger, faster, higher quality, cheaper. I can’t help them with the cheaper part; I’m not going to. But the rest — that’s where our opportunity is. This is how we differentiate ourselves from the rest of the competition out there who just wish they were you. … We are the best in the industry and with your help, we intend to stay there.”

“The part that I’m most proud of is our DMC family,” he said. “Without them, this is just a building filled with stuff. People are what makes this company come alive and stay alive.”

Read the Article on The Advocate-Messenger
Previous
Next

For marketing or media information, please contact our marketing department.

Send us a message